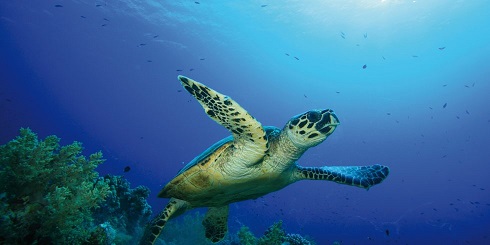 While offering immense resources, producing 50 % of the oxygen we breathe and absorbing 25 % of the world’s green gas emissions, our oceans are threatened by pressures from climate change, pollution, plastics and overfishing.

Today, based on the marine gross product, the ocean is the 7th largest economy in the world and the overall estimated value of key ocean assets represents more than 24 trillion USD.

Yet, only 4% of the global ocean enjoy protected status. Besides, if current fishing rates continue, the world’s fisheries will collapse by 2048 and at current rates of temperature rise, coral reefs will disappear by 2050. Emblematic marine species are also threatened with extinction, such as sharks with one hundred million kills every year.

The persistence of pollution caused by plastic means that its presence at sea is one of the greatest environmental disasters for our future. Once discarded into the natural environment, plastic can take up to 500 years to disappear. Under the effect of the sun, it breaks into fragments and generates a sort of “plastic soup”. Accumulating on the seabed, it contributes to oxygen depletion. Drifting between waters, it can suffocate the fauna which ingest it or get trapped. Becoming part of the food chain, it poses a serious public health issue. By fragmenting, the material become invisible but its presence is still harmful.

Facing this major, the Foundation is engaged at different levels to stem the entrance of plastic in the sea.

Facing this global challenges and these major threats for the environment, the Princess Camilla of Bourbon Charitable Foundation is taking action to curve the trend and promote a sustainable ocean to create a new alliance between humanity and the ocean – alone capable of guaranteeing our future.