The Princess Camilla of Bourbon Charitable Foundation is established as a charitable foundation under the Foundations Act 2012 of Mauritius on 7 March 2017. The main purpose of the foundation is the promotion of charitable, technical and educational causes, including, but not limited to, the protection of the environment, world ecology and marine life and promotion of scientific development in the emerging markets.

The council members of the foundation consist of the following persons and association:

The first philanthropic investment that the foundation will be funding is the Voluntary Marine Conservation Area (VMCA) Project.

The VMCA Project was started in response to the loss of hard coral cover and marine biodiversity in the heavily used lagoon patch reefs around Mauritius. Voluntary Marine Conservation Areas (VMCAs) are selected sites in the lagoon where resource users and coastal communities agree that no extractive or destructive activities will be done. The primary objective is to help marine life and biodiversity of these VMCAs and the surrounding lagoon restore themselves.

This community-based conservation project uses a multiple stakeholder approach whereby direct users and community members are engaged to participate in; identifying problems facing their marine resources, agreeing on marine conservation sites and actions and training and capacity building sessions for better understanding and managing their resources. VMCAs can only be established with the support of direct users and fishermen registered at the nearest fish landing station to the chosen site.

The success of these VMCA sites can help further promote real community co-management arrangements with local government for legally designated Marine Protected Areas and Marine Reserves. Reef Conservation has been working with fishermen and other local coastal community stakeholders to facilitate the establishment of VMCAs since 2009. There are currently two active VMCAs: one in Roches Noires and one in Anse La Raie. Reef will use the Foundation’s funds to continue to work with these villages to protect the marine resources there.

The Voluntary Marine Conservation Area (VMCA) Project was started in response to the loss of hard coral cover and marine biodiversity in the heavily used lagoon patch reefs around Mauritius. 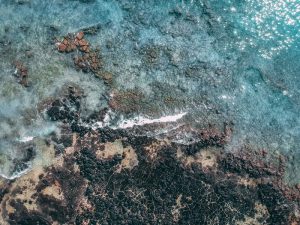 At each site, a VMCA committee composed of boat operators, fishermen, village representatives and volunteers is set up in order to carry out sensitization activities, agree on sustainable actions in the site and monitor compliance with the VMCA code of conduct. Reef Conservation works closely with stakeholders to identify the gaps in marine conservation management, initiate dialogue between the main resource users, build capacity in marine resource management and provide training in marine ecology and conservation.

The VMCAs: Roches Noires, and Anse-la-Raie

Located on the East coast of Mauritius, Roches Noires VMCA is 0.08 km2 or 8ha in size protected by a barrier reef. The reef is composed of coral bommies and the lagoon is dominated by seagrasses.
The project aims to support the voluntary marine conservation area community committee through; providing training and capacity building, providing long-term ecosystem data to support management decisions, identifying actions that can support management of the VMCA as well as provide opportunities for individuals trained though this project.
The project in Anse La Raie lagoon is localized in the north of Mauritius between Cap Malheureux and Grand Gaube. This site, as shown in figure 2, is 0.5 km² or 50 hectares which represents 9% of the lagoon in which patches of 35 – 60% live coral still survive. This is significant for the lagoon as many areas were severely affected by a massive bleaching event in 2009 which resulted in the death of many of the patch reefs.
in Anse La Raie the VMCA site is used by a number of hotel and private tourism operators, in 2014 two fixed mooring buoys were deployed as well as a snorkel trail to help protect the coral from anchor damage and breakage from snorkelers. Specific training was also developed for the operators to ensure proper usage of the infrastructure and the monitoring of the VMCA now incorporates specific surveys for this site.
Fisherman associations, community members, hotel groups and tourism operators from both project areas have all supported the project by attending meetings, sharing local knowledge and making decisions about the VMCA sites, including; location, size and sustainable uses.
To ensure the long-term existence, management and success of these voluntary conservation sites, there is need for further understanding of the ecosystems and biodiversity within them.
With new funding, the organization aims to further develop its ties with each village and train volunteers in ecological monitoring, communication and reinforce the surveillance at each site.